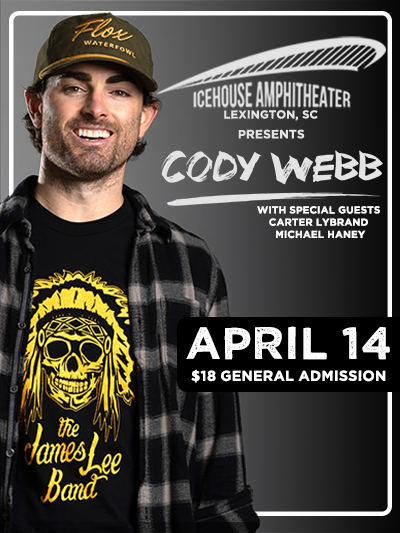 Join the Icehouse Amphitheater on April 14 for local singer-songwriter Cody Webb. Cody grew up in the small town of Ridge Spring, SC. Cody’s childhood consisted of hunting, fishing, sports and music. His mother was the music minister at his hometown church and his father was a singer-songwriter and musician, so it came as no surprise when Cody chose to follow in their footsteps and take his own path into the music world. He began playing guitar at a young age, with musical roots that planted in Southern Rock. “I was influenced by Lynryd Skynyrd, Allman Brothers, Pink Floyd, and many other classic rock bands,” said Webb. His first big gig was at the South Carolina Poultry Festival, playing alongside his father’s band. With shaking hands at a mere twelve years of age, Cody had his spotlight moment playing the intro to “The Ballad of Curtis Loew.” It was that moment that Cody knew he wanted to be a guitar player, setting his eye on headlining the festival himself one day.

Joining Cody on stage will be Michael Haney and Carter Lybrand. Tickets are $18.00 and will go on sale January 27 at 9AM.